Analytics and the Modern Energy Supplier 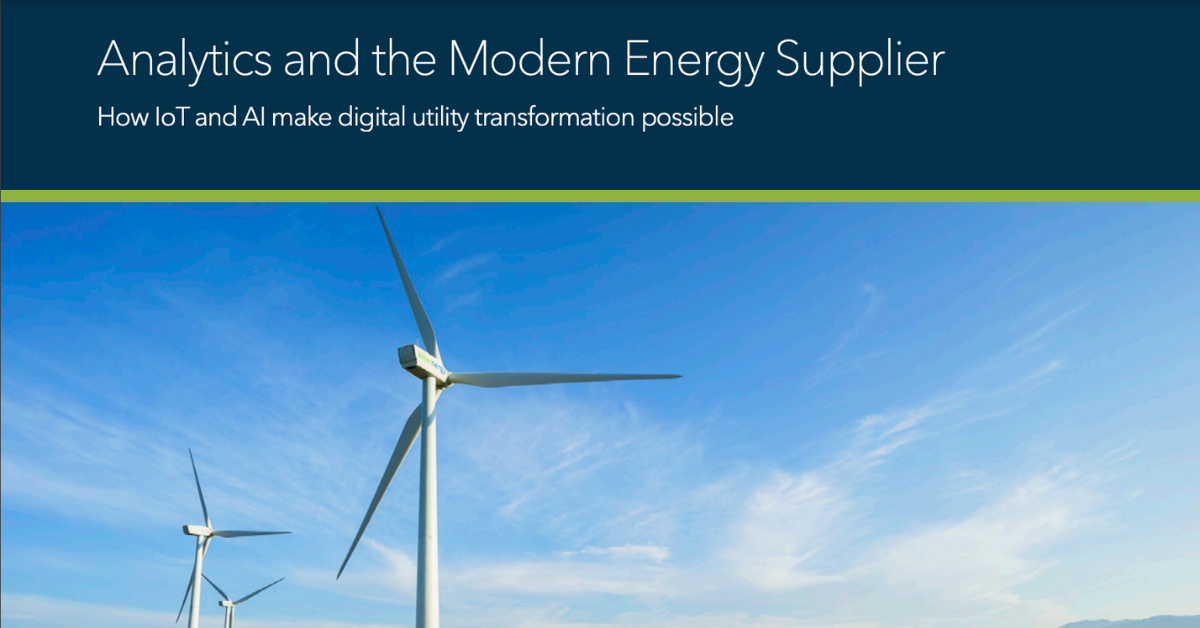 Disruptions in the energy supply chain continue to challenge the viability of traditional utility business models. For example, some utilities with declining load growths – due to distributed energy resources and energy efficiency programs – are in financial trouble. Such disruptors erode revenue and ultimately could sound the death knell for some companies that traditionally make money based on their capital investments and the volume of electricity they sell.

In response to disruptions in the electric energy sector, modern energy suppliers have emerged. Thanks to data from the Internet of Things (IoT), advanced analytics and artificial intelligence (AI), both new and existing suppliers are adapting to – and even thriving in – the quickly changing energy supply landscape.

Who Is the Modern Energy Supplier?

It depends on who you ask. And it’s not singular.

Modern energy suppliers are a collection of entities whose ultimate purpose is to deliver energy to customers. They fulfill a variety of roles and interact with other entities to:

Modern suppliers are involved in one or more of the supply chain functions described above. And they inherently respond to external factors not directly under their control, such as the rise of electric vehicles. Modern energy suppliers might be described as innovative, socially aware and agile. Their business models vary depending upon core business objectives and regulatory environments, but they generally revolve around performance-based principles and competitive marketplaces

Compare this to traditional suppliers who manage most or all pieces of the supply chain and are owned by shareholders, which reduces risk appetite. They earn allowed returns on capital investments, but otherwise pass operating and maintenance costs straight to consumers. In this traditional cost-of-service model, end-use customers were historically known as “load” and growth or decline of individual “loads” hugely affects traditional supplier revenues. If gauging the personality of a traditional energy supplier, they could be described as risk averse and focused on maintaining the status quo

But regardless of the supplier’s business model and “personality” type, external forces are driving radical changes across the energy supply chain – from generation and transmission of power to distribution and services. Enterprising modern energy suppliers will take advantage of change, and fill gaps that arise, to create new opportunities for success

Enterprising modern energy suppliers will take advantage of change, and fill gaps that arise, to create new opportunities for success

The Forces of Change and Industry Response

The gaps between the current energy supply chain landscape and its future vision are driving change and fall into five categories:

The success of companies like Uber, Lyft and VRBO was predicated on two fundamentals:

With regard to the energy supply chain, parallels to Uber, Lyft and VRBO exist. Within the energy supply chain, it is only a matter of time before business value from a shared economy is harnessed. For example, consider the underutilized capacity to generate power and transmit it to customers. With technologies such as blockchain, customers can directly enter into contracts with energy suppliers to tap into these underutilized assets, thus yielding substantial energy cost savings.

A good example of industry response to the emerging energy sharing economy is Japan’s TAKE Energy Corporation, which entered into a partnership with Electrify.Asia to deploy its peer-to-peer energy trading platform in Japan’s Kyushu region.

Consumers in Kyushu will be able to trade excess solar energy from the region’s solar farms with the ease of use, transparency and security provided by Electrify’s blockchain platform.

The data for these applications is largely generated by sensors connected to the Internet of Things (IoT). This new extended IT infrastructure enables new sense and control capabilities, powered by advanced analytics. Utilities are rapidly scaling up their skills in areas of machine learning and artificial intelligence to enhance grid modernization and automation efforts.

Digitalization is not the only revolution in the energy supply chain. Advances in science and engineering have made it possible to tap renewable energy sources on a scale not previously contemplated. Consider the capability to store electric energy in centralstation battery installations and electric vehicles. Concurrent advances in these technologies provide endless opportunities to reconfigure the energy supply chain in a way that makes the distribution grid more efficient and resilient.

Advances in transmission technology are also profound, as illustrated by widespread deployment of phasor measurement units (PMUs) through the North American SynchroPhasor Initiative. This international community of electric industry members, researchers and vendors is working together to advance the understanding and adoption of synchrophasor technology for enhanced power system reliability and efficiency. For example, San Diego Gas & Electric is using synchrophasor technology to modernize wide-area situational awareness, and online and offline operations support.2 They are pioneering distribution-level PMU uses and innovative transmission monitoring.

We help people face the challenge of converting data into structured information that supports effective decision-making. We combine SAS analytical system with our own industry and statistical analysis expertise in order to present a complete solution offering for our clients.

Pinnacle Solutions: Have a question? Let us help!